Do Dogs Get Jealous?

Do dogs ever feel jealous when their owners bring home new puppies? Does sharing attention with other members of the family turn dogs green with envy? Animalia explores. 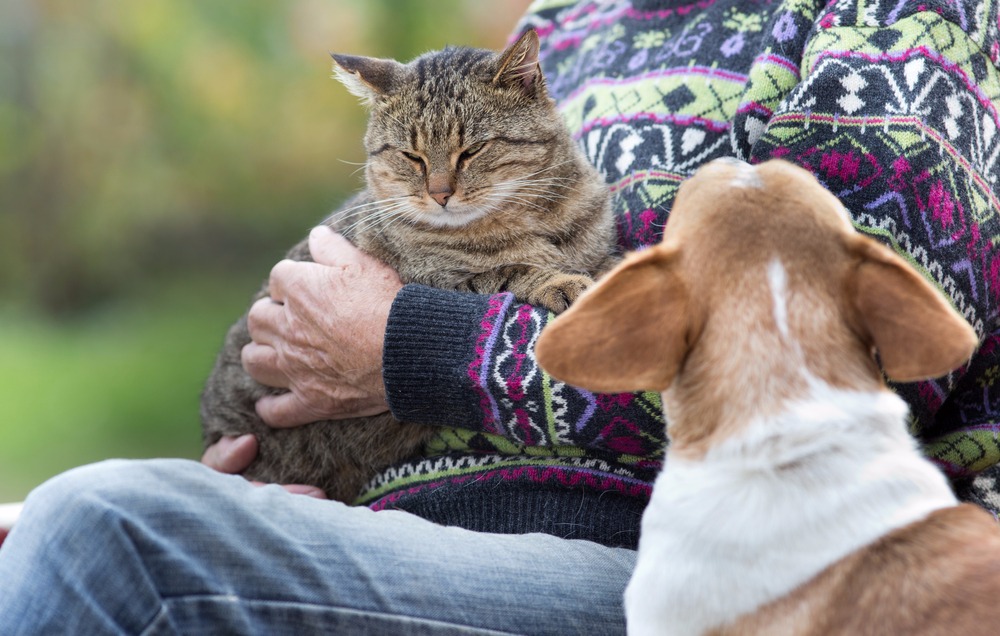 If the addition of a new child or pet to the family has caused sudden personality changes in your beloved pup, you may find yourself wondering if dogs feel jealousy. Well, do canines ever go green with envy?

The jury is out as to whether dogs feel jealousy in exactly the same way that humans do. Animal psychologists definitely believe, however, that canines can feel envious of fellow dogs and people. When a dog feels jealous, telltale behaviors can become glaringly obvious. These include snapping at fellow pets and people or attempting to get between their owner and the thing that’s preoccupying them.

In some cases, dogs may exhibit more troublesome behavior. A jealous dog can turn destructive quickly, ruining floors or furniture and generally wreaking havoc throughout the house. In rare cases, a jealous dog may attempt to attack whatever is stealing away your attention, regardless of whether it’s a living being or an inanimate object.

What is canine jealousy?

Most of the time, dog jealousy is nothing to worry about. Canines quickly fall into line once a new pooch has been introduced to their daily life and routine. With a little coaxing, most dogs will happily welcome a new housemate into their pack. While relatively rare, persistent and destructive jealous behavior warrants prompt veterinary intervention.

Certain breeds of dogs appear to be more jealous than others. According to canine behavior experts, some of the most jealous dog breeds include French Bulldogs and Cocker Spaniels. Even breeds that are famous for being loyal family pets like Border Collies have the potential to become green-eyed monsters on four legs.

Do dogs get jealous of humans?

Yes, dogs can become jealous of people. Many of us worry about bringing a new pup into a household occupied by an adult dog. Canines can just as quickly become jealous of unfamiliar people, be it a new spouse, baby, or a member of your extended family.

In fact, anyone who might steal attention from your dog for a few moments can stir up at least temporary feelings of envy. This is a common issue for single people who’ve recently brought a new partner into the mix. Even if your other half is usually great with animals, your dog may make it tough to make a good first impression.

If you’ve noticed signs of jealousy in your dog, there’s no reason to panic. Don’t automatically assume, however, that these feelings will subside over time as your pet becomes more familiar with new faces. Are your new people or pets planning to stick around? If so, you’ll want to address jealousy before it gets worse.

Why do dogs get jealous?

Do dogs get jealous of new dogs? Should I be worried about bringing a new partner home? If you have a canine that’s prone to jealousy, these are questions you’ve probably already asked yourself. Dogs get envious for all manner of reasons.

A change in their routine

If you’ve recently changed your work schedule and aren’t seeing your dog as often as usual, they may be suffering from feelings of neglect. In a worst-case scenario, they may be feeling as if you’ve abandoned them.

In some dogs, these feelings can lead to a spike in jealous behavior when you’re around. If your routine has permanently changed, make sure you make extra time for your dog to mitigate any jealousy and acting out.

They’re not getting enough attention

Sometimes, a jealous dog is simply pining for attention from its owner. As with people, dogs can feel insecure and anxious when they don’t receive enough from the people they love most in the world.

If you’ve changed your routine and aren’t interacting with your dog as much as you used to, make them a priority and spend sufficient time playing with them and showing them signs of affection.

Your new schedule may be time-consuming and limit your options, but just make sure you’re not ignoring your dog during the rare hours you get to spend together.

Do dogs get jealous of other dogs?

Rival pooches are a major contributor to jealousy in dogs. In fact, concerns over jealousy are one of the main reasons why people avoid purchasing or adopting additional pets. Why do dogs get jealous of other dogs? It’s simply a case of having someone new to contend with in the battle for your time and affection.

Bringing a puppy home to meet an adult dog can be stressful, but remember that dogs are naturally social animals. Provided you’re prepared to deal with some low-level jealous behavior, it’s typically simple to establish close relationships.

After bringing home a new dog, make sure your current canine isn’t pushed to the sidelines once your new pet arrives. Don’t be afraid to show affection to your new animal, but don’t leave your other dog feeling like, well, the other dog.

If you find yourself having to boost the amount of praise and affection you usually heap on your dog, make sure this is only a short-term solution. You can wean them off these enhanced levels of affection once jealous behaviors diminish and your pets are getting along better.

There are new people or babies in the home

Many dog owners will tell you about how protective their canines have been over new babies. While most dogs will display affection and loyalty to infants, they can of course also become jealous of your new bundle of joy.

It’s not hard to see why. A newborn child demands a significant amount of your time, with most of your day committed to bonding, feeding, bathing, and playing. All of this inevitably means less quality time with your canine. Some animals will naturally feel jealous and, if without intervention, they may start to act up.

However, don’t assume that all new behaviors around babies are the result of jealousy. For most dogs, babies are simply an overwhelming presence in a once-quiet household. A crying baby can easily trigger low-level anxiety in a canine. What’s more, your dog may be mirroring your own emotional responses. If you’re having a hard time coping with the stresses of parenthood, their behavior could echo your own anxiety.

The hormone oxytocin has been shown to produce feelings of both love and jealousy in humans. It’s present in dogs too and potentially contributes to the same emotions.

Signs that your dog is feeling jealous

Worried you’re dealing with a jealous dog? Usually, there isn’t just one sign that gives away that your pooch is feeling envious.

They’re going out of their way to impress you

Is your dog doing tricks without being given a command? They may be trying to impress you and grab your attention. They might not be fishing for a reward, but they are most definitely trying to get your attention and steer you away from whatever is distracting you.

An envious dog will quickly let it be known that they don’t like you spending time with someone new. It’s often a particular issue with romantic partners. Signs of physical intimacy may be met with the occasional growl or bark. Sometimes, dogs may even attempt to get in between couples.

It’s worth bearing in mind that jealous behavior is not a sign of contempt. Your dog is merely looking to redirect your attention.

Aggressive behavior can sometimes turn destructive. Your dog may decide to unleash their rage on clothes or furniture. If your dog is house trained and typically well behaved, these kinds of antics are a clear indicator that you’re dealing with a jealous pooch.

What can I do about a jealous dog?

Avoid praising your dog or rewarding them to let it know they’re still loved. Ignoring problematic episodes is always the best way to let them know their behavior won’t pay off. You should also think about extra training. Too many dog owners prioritize puppy training, but responsible dog lovers recognize that training is a lifelong process that’s useful for curbing problem behaviors. New people in the house? Actively include new roommates or romantic partners when you spend quality time with your dog. Your pooch will stop seeing them as a rival for your affection and start considering them a member of the family.

Still can’t get to the bottom of your dog’s jealousy? It might be time to consult a behavioral therapist or a trainer for further insight. Animalia will cover the costs. Get in touch with Animalia today.