Do Dogs Really See The World in Black-And-White

Contrary to popular belief, dogs can see colors. They do not, however, see the full spectrum that humans do. Find out more about how pups perceive the world around them 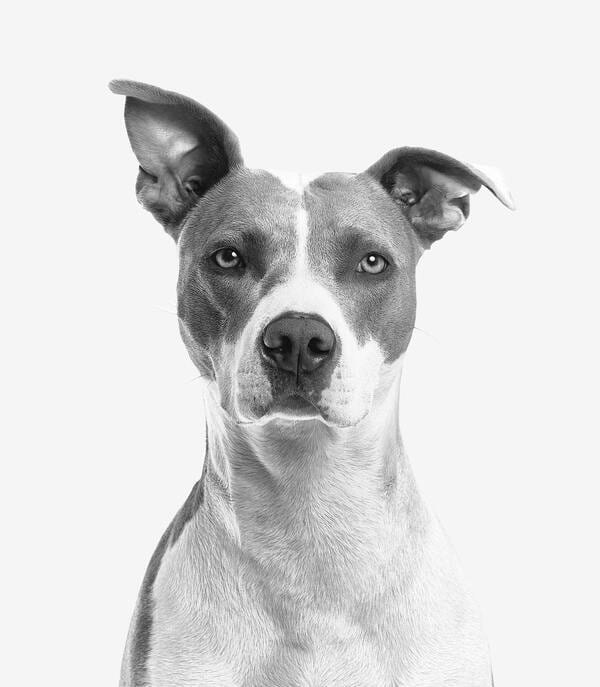 We’ve all heard it said that dogs can only see the world in black and white, but is it true? No. It’s no more true than the one about cats having nine lives to spare. Contrary to popular belief, dogs can see colors. They do not, however, see the full spectrum that humans do. Find out more about how pups perceive the world around them.

Where did this black-and-white myth come from?

Many common theories have held that dogs see the world in shades of gray or through a haze of blue and yellow hues. It’s only in recent decades that researchers have been able to take a closer look at the canine eyeball and better understand how it sees the world around it. It turns out dogs can, in fact, see a spectrum of colors, but that their vision pales in comparison to ours. Dogs have exceptional snouts (far stronger than human noses), but their eyes don’t see the world as colorfully or as crisply as we do.

So where did this persistent myth about black-and-white canine vision come from? It may have originated when National Dog Week founder, Will Judy, made the assertion in a dog training manual he wrote in 1937. It gained more prominence in the 1960s when researchers hypothesized (incorrectly) that primates were the only mammals capable of color vision. It is now widely accepted that dogs see an incomplete color spectrum.

Have you ever been startled at the sight of your dog’s glowing eyes suddenly glowing as they catch a beam of light in a dark room? Never fear, they’re not possessed. You’re just getting a look at their tapetum lucidum. This reflective lining, located behind the retina, is essential for your dog’s low-light vision.

Now, stick with us, we’re about to get a bit technical. The retina is a thin layer located at the back of the eye near the optic nerve. It’s composed of two kinds of photoreceptors that convert light into electrical impulses: rods and cones. Rod cells are especially sensitive to light and useful for seeing in low-light conditions. Cones, on the other hand, provide for color vision. When a cone is missing or defective, the eye fails to recognize certain wavelengths. Humans experience two types of color blindness. One manifests itself in an inability to distinguish between red and green, the other makes it challenging to differentiate blue and yellow tones. In a fluke of physiology, dogs have yellow-blue dichromatic vision that makes them see the world somewhat like a person with red-green color blindness. Dogs can distinguish blues and yellows, but can’t tell the difference between reds and greens.

Color blindness was first recognized in England in the early 19th century by John Dalton. He realized that, along with his brother, he couldn’t recognize some colors. They commonly confused scarlet with green and pink with blue. Among those with Northern European ancestry, it is thought that up to 8% of men and 0.5% of women have red-green color blindness.

Humans without color blindness have trichromatic vision, possessing three color receptors in their eyes. They can perceive the full visible light spectrum made up of combinations of red, blue, and green. Dogs, much like color blind people, only have two kinds of cones. These let them perceive color combinations of blue and yellow. They can’t perceive any shades that contain blends of red and green. When your dog looks at the world around them, it’s free of shades such as pink, purple, or orange.

The differences in human and canine vision have been driven by years of evolution. Both kinds of eyes have changed over time to better serve their primary function. The ancestors of our pet dogs were nocturnal hunters, chasing and catching their food at night. Their eyes adapted for nighttime hunts and learned to detect the slightest movements in the dark. Growing accustomed to night vision involved developing larger lenses and corneal surfaces as well as a reflective membrane inside the eye. While dogs have fewer cones than humans, their eyes have more rods which improve low-light vision and help them move confidently in the dark.

What types of colors can dogs see?

It was only as recently as 2013, that scientists confirmed dogs can see in color and do not rely on rods alone for their vision. To prove this, research teams placed four pieces of paper (light yellow, dark yellow, light blue, and dark blue) on feed boxes. Only the box with the dark yellow paper contained a tempting piece of meat. Once the dogs learned to associate the dark yellow paper with food (shades of Pavlov’s past experiments!), the scientists swapped it out for dark blue and light yellow pieces of paper.

The researchers had assumed that the dogs would prioritize the dark blue paper since it was believed that dogs perceived objects based on brightness rather than color. To the scientists’ surprise, the majority of the dogs went straight for the box with the yellow paper. This demonstrated that it was the color, not the brightness, that the canine test subjects had learned to associate with food.

While dogs aren’t technically color blind, they do see the world differently from their owners. To them, a red toy will appear brown and an orange toy will look brownish yellow. Owners can better engage dogs with blue and yellow toys that will stand out from the browns and grays that make up most of their field of vision. If you’ve ever wondered why dogs love tennis balls so much, here’s your answer.

Newborn puppies are slow to open their eyes, doing so around 10 to 14 days after birth.

Making the most of what your dog can see

Now that you’ve learned a bit about your dog’s eyes, you probably have a better understanding of their playtime preferences. The limited color spectrum dogs can see helps explain why tennis balls send them flying and a red ball might inspire a more modest response. Red and pink toys are harder to distinguish against a backdrop like the green grass of a dog park or backyard. You can make it easier to get dogs moving with blue and yellow frisbees or balls. Obviously, well-loved toys of every color are typically easy to find by scent. For obedience training, however, blue and yellow shades are best for sustaining your dog’s attention and teaching effective lessons.

Indoors, keep in mind that brightly colored or patterned carpets can confuse a dog’s eyes. When toys blend in, dogs may struggle to find them and even grow anxious. Opt for squeaking toys when you can. The noises from these toys will keep them from becoming indistinguishable and keep dogs happily engaged. Why not try a dark blue, squeaking toy for the best of both worlds?

Black, white, yellow or red…eye problems in dogs are pretty common. While some of them are mild and can be managed at home, others can be quite serious and threaten your dog’s vision. Pet insurance makes it simpler to navigate health concerns, both big and small. Get a quote from Animalia today.