How Do I Know If My Dog is Pregnant?

How do you tell your dog is a mom-to-be without the obvious sign of a swollen belly? Read on to learn what to expect when your dog is expecting. 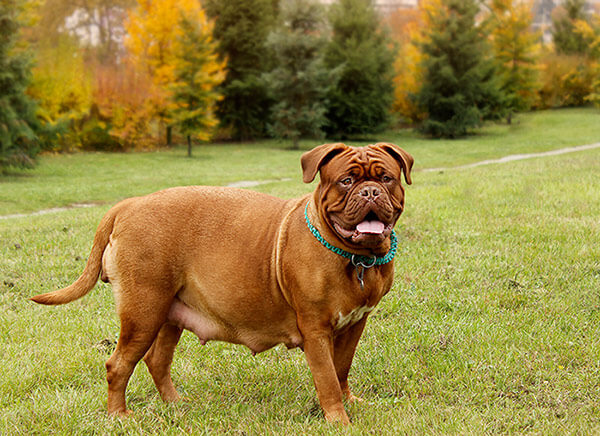 Learning that your female dog is expecting and that you’re about to become the proud grandparents of multiple puppies is a joy but also a great responsibility as a dog owner.

But, how do you tell your dog is a mom-to-be without the obvious sign of a swollen belly? Read on to learn what to expect when your dog is expecting.

What are the early signs my dog is pregnant?

Dogs are able to get pregnant when they come into season, which happens about once every eight months. This fertile period is also known as ‘being in heat’, and lasts for up to three weeks.

But sometimes, a giant belly isn’t enough to know whether your female dog is pregnant, so we’ve listed a few more signs soon-to-be-mom-dogs might show:

Just like humans, some female dogs can vomit or show a loss of appetite for a few days, especially in the first few weeks of the pregnancy, when the body is overwhelmed by hormones and tries to readjust to the new situation. Some moms will exhibit a swollen belly and changes in appetite so it is always necessary to check with your vet and confirm the pregnancy.

The dog gestation period usually lasts 61- 65 days, but you may not notice any obvious physical changes until your dog is already well into her term

How do I know my dog is pregnant for sure?

Unlike women, female dogs can’t go to the store and pick up a pregnancy test or pee on a stick. You’ll have to make sure the vet runs all the following tests in order to confirm the pregnancy:

How long will my dog be pregnant?

A dog’s pregnancy lasts 62 – 64 days and is directly influenced by the number of pups the proud mom is carrying, as well as the breed size. The puppies grow rapidly, especially in the early pregnancy, with the mom’s belly swelling up to double in diameter every week. Following the first month of pregnancy, the vet can determine fetal heartbeats and you’ll know how many puppies to expect in your next litter.

Your vet can confirm pregnancy with either a dog pregnancy test, which measures her hormone levels, from days 21-25 of her term, or by ultrasound from day 20-22

What do I do if my dog is pregnant?

The first thing you should do once you find out your dog is pregnant is – to celebrate.
Then, take the momma-to-be to the vet for some routine checkup and evaluation. Regular checkups during the pregnancy weeks are important too as it can be risky sometimes. Here’s what’s next on your to-do list:

If your dog is pregnant, it’s important to feed her healthy nutrition that helps all puppies develop right. However, overfeeding is not advised, as it can cause obesity which conflicts with the natural pregnancy process. The best way is to feed her small and frequent meals.

Strenuous exercise should be excluded during the first two weeks of the dog’s pregnancy. This is the time when the embryos get implanted during the gestation period. Following the second-week mark, you can release your dog from the leash and let her roam. By moving her body, her delivery process would be easier and she would lose weight faster. Still, at the close of the second month – allow your active girl to turn again into a proper couch potato. She deserves it!

Puppies on the horizon

Towards the end of the second month, it’s time to start preparing for the puppies’ arrival. Once you have a due date, it’s time to prepare a birthing or ‘whelping’ spot. That would be the place where your dog will deliver her puppies. It needs to be located in a warm and quiet spot in your house and to be large and comfy enough for the soon-to-be-busy mother of several.

Start introducing the momma to her birthing place – maybe even put her favorite blanket inside the nest, so it reminds her of trust and comfort. Keep the box size as large as an average children’s swimming pool and ensure it is high enough so the puppies don’t go on a rampage once they start crawling.

What to do when she goes into labor?

Although your female dog should be able to handle pregnancy and labor herself, being on stand-by to offer soothing words can put them at ease, and also allow you to step in should anything unexpected happen.

Your pregnant dog will give you plenty of hints to let you know their labor is beginning and the pups are on their way. In most cases, dogs deliver puppies smoothly and you shouldn’t have to interfere. However, some signs, such as discolored discharge or mum straining without producing pups, could suggest complications.