How Do Lost Dogs Find Their Way Home?

We’ve all heard stories about long-lost dogs finding their way back home. In this blog, Animalia showcases some notable examples and looks into potential explanations. 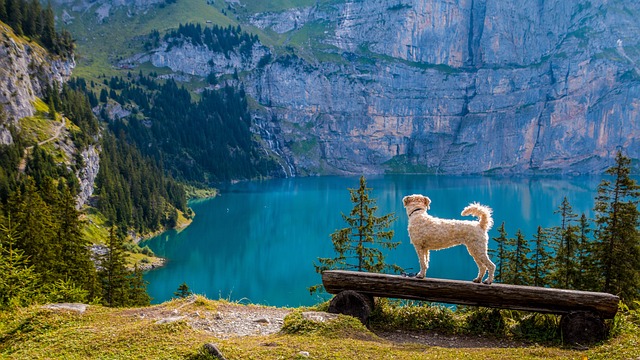 Dogs can’t read posters or ask bystanders for help, so how do lost dogs sometimes seem to find their way home against the odds? A number of factors may help to explain these seemingly miraculous reunions.

A remarkable sense of smell

Dogs have an incredible sense of smell thanks to snouts that include far more olfactory neurons than the human nose. Our beloved pups have anywhere from 220 million to 2 billion sensory receptors. We boast a relatively paltry 40 million. Dogs use their impressive sense of smell all the time. When you’re out and about with your pooch, you’ll notice their constant sniffing. They’re also leaving scent markers behind as they move about, creating a kind of a map.

Dogs can use aromatic markers to find their way between familiar markers and navigate toward home. Scents can potentially take them a long way. 10 miles is a relatively easy journey for a dog if the wind conditions are right. Overlapping circles of familiar scents allow dogs to effectively triangulate familiar locations. One smell in the triangulation overlaps with the smell of something familiar in the next one, creating a trail that dogs can follow home.

Czech scientists conducted an experiment to answer the question, “Do dogs know their way home?” 27 dogs from 10 different breeds were equipped with cameras and GPS-powered collars and monitored over more than 600 trials in the forests of the Czech Republic. The dogs went for a walk with the owners and were encouraged to chase after prey. 60% of the dogs subsequently found their way back to their owners by tracing their own scent trail.

Microchips dramatically improve a pet’s chances of finding their way home. According to the American Veterinary Medical Association, microchipped dogs are more than twice as likely to reunite with their owners as dogs without microchips.

The Czech researchers looking into how lost dogs find their way home were also interested in magnetism. It has long been suspected that generations of evolution have given animals, including dogs, the ability to sense magnetic fields. Still, no one really knows how this works. Throughout the study, the dogs that didn’t immediately follow a scent marker were often observed running back and forth along a north-south axis. They were then able to run back to their owners. It is believed these initial “compass runs” helped the dogs orient themselves. In fact, the dogs using compass magnetism were found to reunite with their owners considerably faster than the dogs that relied on scent alone.

There’s no doubt that dogs navigate with their noses and, while the jury is still out on their use of magnetism, dogs most definitely use sight as a navigational tool. While dogs beat humans in any sniffing challenge, their eyes are actually weaker than ours in many respects. Still, they serve as handy navigational and hunting tools. You’ve probably noticed that your pet is constantly scanning with their eyes as well as their nose when you’re on a walk. Looking for visual markers helps them create a mental map of their surroundings that acts as a backup for their sense of smell. Sight may not be the primary sense dogs rely on to guide themselves home, but it definitely helps.

Remarkable dogs who beat the odds

Dog lovers who have been separated from their pets can take heart in these stories of improbable reunions.

In 2012, Mark Wessells had to rehome his Labrador Retriever, Bucky, as his new apartment in Virginia didn’t allow pets. He drove Bucky to his brother’s house in South Carolina. Bucky disappeared only to be found eight months later wandering in a South Carolina forest. Luckily, Bucky was microchipped and a vet was able to reunite him with Mark. No one really knows how he managed to travel 500 miles in his effort to get back to his original home.

In 2013, a pair of stray mutts, Ben and Jade, were taken to a shelter in Terre Haute, Indiana. Jade was pregnant with a litter and the canine family stayed together in the shelter for several months. Then, Ben found a new human family. Three weeks later, however, he ran away and managed to navigate 10 miles across busy streets, railway tracks, and other obstacles to find Jade. Seeing how closely bonded the pair were, Ben’s new owner gave Jade a forever home as well.

The Humane Society estimates that 10 million pets are separated from their owners each year.

In an ideal world, no pet would get lost and have to find its own way back home. To keep your pet safe, make sure they’re microchipped, registered, and always outfitted with ID tags. Pet insurance can provide some extra peace of mind. Whatever pet ownership brings, Animalia is always on hand to support you.