The Science Behind Those Irresistible Puppy Dog Eyes 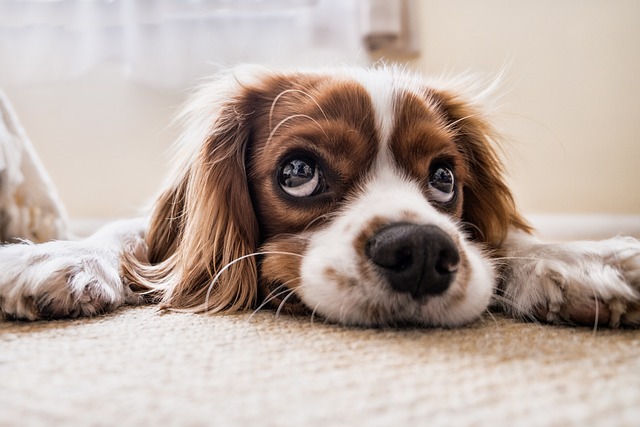 Our canine pals can’t engage us in conversation, but subtle changes in their facial expressions often speak volumes. The eyes in particular tend to do a lot of talking – especially when a dog wants something. We’ve all seen the proverbial “puppy dog eyes” and most dog owners have probably used them as an excuse to serve up an extra treat.

Whatever a pooch’s age, those pleading eyes are known to overcome owners’ defenses. If your dog wants a snack or a little extra affection, don’t be surprised when they look your way.

Though cute and cuddly pups don’t look especially tough, even the daintiest dogs breeds can trace their lineage back to wild wolves. More than 30,000 years ago, the pets we know today first branched off from their ancient ancestors. With time their instincts and appearance morphed to suit the needs and lifestyles of people all over the world.

Recent studies into the bodies of both wolves and dogs has helped build our understanding of the evolutionary processes that produced today’s docile canines. One study, authored by Duquesne University biologist Madisen Omstead, focused on facial muscles and identified the factors making puppy dog eyes possible.

The canine retina is composed of both rods and cones just like its human equivalent. Since dogs have only 10% as many cones as humans have, they see an incomplete color spectrum.

Omstead and her team examined the remains of several wolves and dogs to study the mimetic muscles in their faces. In humans, these muscles help us raise our eyebrows, grin, and make other small expressions. They are mostly composed of fast-twitch myosin fibers, which helps explain why we can’t hold such expressions for very long.

Dogs and wolves typically have far different mixes of mimetic muscles. While a dog’s face is composed of anywhere between 66% and 95% fast-twitch fibers, wolves have far more slow-twitch mimetic muscles. These fibers, useful for extended howls, make up around 75% of a wolf’s mimetic muscles.

The scientists noticed two primary differences between canine and lupine facial muscles, both of which contribute to the friendly expressions seen in domestic dogs. First, dogs were all found to possess strong levator anguli oculi medialis muscles. These eyebrow-raising fibers were barely present in the wolves researchers dissected. All dogs were also found to possess a pair of eye-widening retractor anguli oculi lateralis muscles.  Wolves and Siberian Huskies – who resemble their ancient family members more closely than most other breeds – have only weak muscles or lack them altogether.

Combined, these muscles power expressions like those heart-melting puppy dog eyes. Omstead’s team believes humans may have played a role in developing these muscles by favoring dogs who were capable of making friendly expressions. Dog lovers have been falling for that same sad-looking expression for ages!

The Siberian Husky, the only breed without retractor anguli oculi lateralis muscles, was first bred in northeast Asia by the Chukchi people.

How those adorable canine eyes evolved

The muscles that make puppy dog eyes possible were developed over generations and generations, helping bond domesticated pups to their human caretakers.

You may feel like your dog is taking advantage of you when they flash that adorable, wide-eyed look. In a sense, they are. Puppy dog eyes give pets a baby-like appearance that appeals to our own natural instincts. We’re inclined to nurture and protect infants, hence the remarkable effect a dog’s eyes can have on our defenses.

A 2017 study conducted at the University of Portsmouth’s Dog Cognition Center even found that dogs save certain specific facial expressions for their human companions. Pooches are more likely to raise their eyebrows and stick out their tongues around people than when presented with other stimuli like food alone.

What makes the canine eye unique?

In many respects, the canine and human eyes are quite similar. You and your pup both have upper and lower eyelids, a tough sclera, a thin and vulnerable cornea, a retina full of photoreceptors, among other familiar features. Among a dog’s unique ocular features are the tapetum lucidum and nictitating membrane.

If you’ve ever caught a startling glance at your dog’s glowing eyes in a dark room, you’re already familiar with the tapetum lucidum. It’s located behind the retina and its reflective powers help dogs and cats both navigate confidently in low-light conditions. Your dog’s nictitating membrane is a third eyelid, offering protection from scratches and supporting tear production. You can spot it in the corner of the eye.

Care for your dog’s eyes, ears, and overall health

Though some canine behaviors last throughout a dog’s life, their health needs evolve as they age from puppyhood into their adult and senior years. Whatever the future brings, a pet insurance policy can help you manage the cost of routine and emergency veterinary care. Next time your dog flashes you that pleading, puppyish stare, consider offering the gift of a comprehensive insurance policy. That’s a treat you’ll both enjoy. Get a quote today.