Why Do Dogs Roll On Their Backs?

Does your dog like to roll on their back? While it’s possible they’re scratching an itch, there are a number of additional reasons a dog might roll. Read on to learn more. 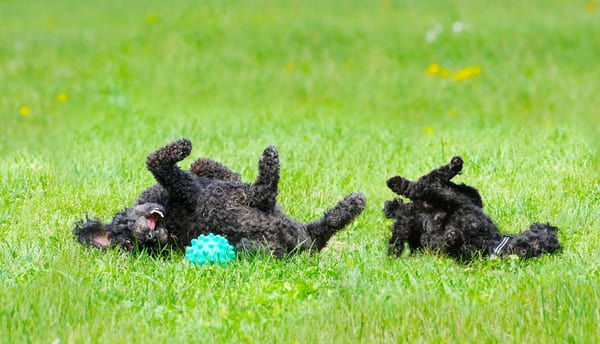 We’ve all seen dogs roll onto their backs, but what does the familiar behavior mean? Are dogs trying to tell us something or simply finding a way to scratch tricky itches?

Dogs roll on their backs for many reasons. Sometimes, they’re looking to mask their scent or mark an appealing piece of territory. Other times, they’re showing a sign of submission and inviting their owners to pet them or engage in some play. Occasionally, your dog may simply be trying to scratch a stubborn itch they can’t relieve through normal grooming. In other words, a dog rolling around on their back is usually nothing to worry about.

Every dog breed displays this habit from time to time. However, if your dog has suddenly started rolling around on their back more than usual or you’re noticing oher strange behaviors in your favorite pooch, something else might be going on. Need help getting to the bottom of why your dog is rolling around on its back? Our helpful guide breaks down everything you need to know about separating everyday scratching from signs of trouble.

Your dog’s behavior may be the result of discomfort associated with parasites like ticks. Though there are believed to be at least 15 types of ticks native to North America, only a small number affect dogs.

Why do dogs roll?

They’re trying to scratch an itch

Many times, your pooch simply has an itch they can’t scratch through more typical means. If your dog rolls on its back constantly, however, a skin complaint like allergies, pests, or infection may be to blame.

Keep an eye on your dog as they carry out their regular grooming ritual. Do they struggle to scratch a certain part of their body? Pretty much every canine will struggle to reach their back with a paw.

Most of the time, this behavior is perfectly normal, but certain breeds like Cocker Spaniels, Golden Retrievers, and American Pit Bull Terriers are more prone to skin complaints and allergies. If your dog has sensitive skin, it may be attempting to alleviate an itch that just won’t go away.

Why do dogs roll around on their backs when they’re outside? Your dog isn’t squirming around to cause trouble. Instead, they’re likely trying to douse themselves in new scents that will help mask their own.

It’s a behavior that’s deep-rooted in canine psychology. Wolves – a dog’s ancestors – use similar behavior to help mask their scent from prey animals while they hunt.

If your dog is rolling to cover their scent, they probably don’t have hunting on the brain. It’s possible (even likely) that your dog is more of a homebody than a hunter anyway. Instead, they’re calling on instinctual memory to help them mark their territory. If you’ve moved to a new home or made significant changes to your environment, back-rolling behavior and scent marking are something you might see a lot more of at first.

What does it mean when a dog rolls on its back? A lot of the time, it can be a sign of submission. This common behavior lets owners and other humans know that a dog is not a threat.

By exposing their bellies, dogs adopt one of the least threatening positions they can. It’s a generally harmless action, but pay attention if your dog submissively rolls over all the time. Overly submissive behavior is sometimes accompanied by other anxiety-related actions, such as inappropriate barking or urination.

As with submission, a dog that rolls on its back could be exposing its underbelly as a way of sharing a greeting. Keep in mind that typical canines will only do this if they’re greeting their owner or someone else they’re especially familiar with.

If a dog is using back-rolling as a form of greeting, it’ll usually be accompanied by other physical cues like a wagging tail or a wiggling torso. If your dog’s ears are also relaxed, take this as a clear sign that their back-rolling antics are their way of saying ‘hi.’

Why do dogs roll over on their back when they’re in a good mood?

Rolling is often a sign of happiness in dogs, signifying a contented canine. Why do dogs roll on their backs when they’re in a good mood? If they’re feeling submissive or in the mood to play, your pooch is simply giving you easy access for a much-deserved belly rub. If back rolling is accompanied by other cheerful behaviors like tail and torso wagging, you can rest assured that this is almost always an invitation to play.

My dog keeps rolling on his back, but doesn’t want to play

Rolling isn’t always an invitation. Sometimes, this sort of action can be a defensive maneuver. Studies suggest that some dogs roll onto their backs to avoid being nipped by other dogs during play. It also leaves them in a better position to land nips and bites of their own.

Don’t be alarmed if your dog is using back-rolling as a defensive ploy. It’s not generally a cue that they’re feeling threatened or confrontational. After all, once dogs are on their backs, they can only really protect themselves from attack. They’re in no position to actively retaliate or make an escape.

Is your dog asking for petting or affection?

A lot of the time, a dog rolls on its back to attract the attention of its owners. Rolling on their backs may be an invitation for petting or affection. An overly anxious may roll over excessively in search of consoling belly rubs.

If you’re dealing with an unfamiliar dog or rescue pet in particular, look for other behavioral cues. Does your dog make anxious noises as you pet them or their ears, eyes, and limbs? If that’s the case, then diving straight in for that belly rub might not be the best idea.

Worried that your dog is rolling onto its back because of a bothersome itch? Are your dog’s back-rolling antics accompanied by anxious or destructive behaviors? In the vast majority of cases, a canine rolling onto their back is nothing to worry about. When the behavior persists alongside other symptoms and dogs don’t seem interested in play or affection, it may be time to speak to your vet.

For additional peace of mind, pet insurance can help. Covering expenses associated with many of the conditions that might cause a dog to roll excessively, the dog insurance helps ensure your best friend always gets the best possible care. Speak to the team at Animalia today for a free quote.