Catching your dog red-handed after doing a naughty deed, such as tearing up a pillow or peeing on your freshly cleaned carpet, is a common part of dog parenting. You notice your dog looking at you with eyes full of what seems like guilt. But is it, though? Let’s find out what experts say about the seemingly guilty dog look 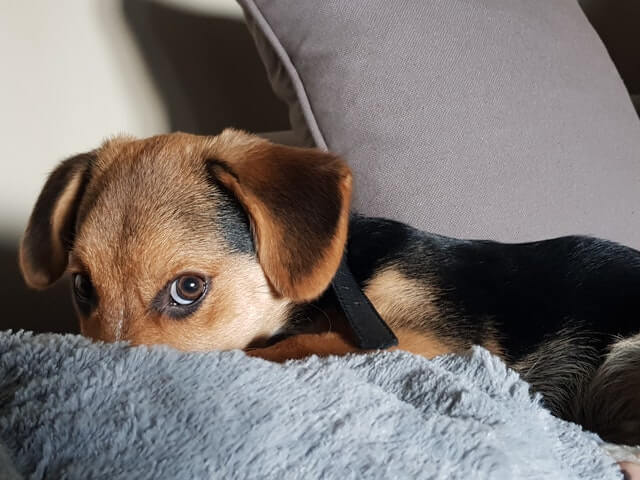 Catching your dog red-handed after doing a naughty deed, such as tearing up a pillow or peeing on your freshly cleaned carpet, is a common part of dog parenting. You notice your dog looking at you with eyes full of what seems like guilt. But is it, though?

Posting guilty-looking pups alongside the results of their misbehavior have been an ongoing trend in the Internet meme culture for years, proving how common the phenomenon is. But if our dogs feel genuine guilt for their mischief, why do they constantly repeat it over and over again?

Let’s find out what experts say about the seemingly guilty dog look.

According to behavioral research, there is no doubt that animals can feel primary emotions like happiness or fear. However, there is an apparent scarcity of evidence when it comes to their ability to experience secondary emotions, such as guilt, shame, or pride. Scientists claim that secondary emotions demand a certain level of self-consciousness and self-awareness that non-humans cannot reach.

Centuries ago, Charles Darwin found that body language linked to guilt, such as lowering the head and averting the gaze, is also used by certain non-human primates.

Wolves and domesticated dogs have been found to show similar behavior. As they function in social groups, it is believed that wolves use guilt-related gestures as tools for resolving conflicts and generating tolerance in their group. Domesticated dogs mimic their owners as far as guilt gestures. However, dogs’ usage of body language associated with guilt doesn’t prove their actual capacity to experience this emotion.

Scientists believe that animals can’t feel secondary emotions like guilt, shame, or pride As they demand a certain level of self-consciousness and self-awareness that non-humans cannot reach

“Guilty Dog Look” as a Reaction to Scolding

Veterinary scientist, Susan Hazel, states that the shamefaced look pet dogs pull off after their owner catches them in a mischievous deed doesn’t indicate their ability to grasp a complicated emotion like guilt – it’s rather a reflection of the dog-owner relationship. Hazel believes that canine body language we tend to associate with guilt is part of their learned behavior. Dogs are accustomed to living with people for centuries, so acting meek and submissive in response to their owners’ anger and reproach reflects their adaptation to evolution.

A major and commonly referenced scientific trial on the “guilty dog look” was carried out in 2009 by Alexandra Horowitz, a professor of canine cognition at Barnard College in New York City. She recorded 14 dogs left alone in a room after their owners had forbidden them to take the treat. When the owners returned and reprimanded the pups, they all looked guilty, even those who hadn’t eaten the treat. These results prove that the guilty-like gestures are connected to their human parents’ anger, and the purpose is to calm them down by looking sad.

According to Dr. Mary R. Burch, a licensed animal behaviorist, when Fido looks guilty after a deed like chewing a shoe or ripping up sheets, he has probably done it many times before. He can recall his owner’s strong reactions, such as yelling, reproach, or depriving him of attention. Therefore, the pup expects a similar reaction and tries to prevent it by asking for forgiveness.

Another behavioral experiment was conducted at Eötvös Loránd University in Budapest.

This research aimed to find whether badly behaved dogs would greet their human parents differently from the disciplined ones and whether owners would be able to recognize how their dogs had behaved by their manner of greeting. The outcome was quite similar to other studies – the owners failed to determine whether their dogs had done any mischief and all the pups exhibited guilty-like body language after being scolded by their humans, regardless of their previous behavior.

While it’s very unlikely that your dog feels genuine guilt, there’s no doubt that they feel your contempt and dissatisfaction with them. Your pet can’t figure out the reason for your anger. So, if your pup has no idea what they did wrong, how can you teach them a lesson or shame them into avoiding misbehavior?

Reproaching your furry friend may be effective only if you do it in the middle of their shenanigans or right after committing the deed so that they can associate bad behavior with your reaction.

Regardless of the scientific proof against the presence of actual guilt in dogs, dog shaming websites are still famous among Internet users. Dog owners use them to post photos of their dogs with the mess they made in the background and “confessions” written as if by their pets about the mischief.

However, this trend may turn out to be more harmful than helpful. The so-called guilty dog look can be a sign of anxiety that you overlook and worsen by shaming and reprimanding.

Instead of yelling and shaming, a healthy way to discipline your pup is by giving them more training or consulting a dog behaviorist to guide you in the process.