Can Dogs Talk to Each Other?

When greeting each other, humans shake hands while dogs sniff their genital areas. Yes, it is quite a radical form of saying hello. Can dogs really talk to each other? 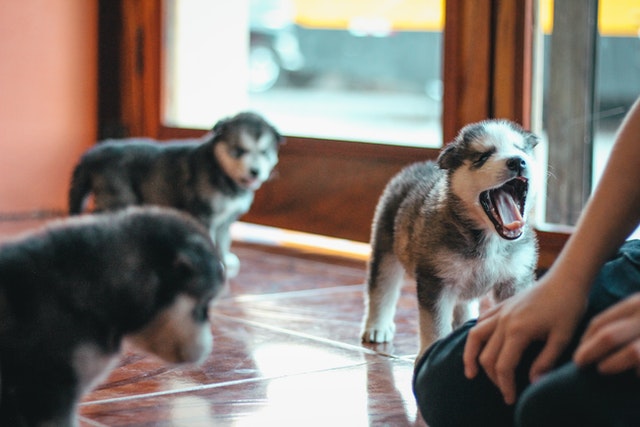 When greeting each other, humans shake hands while dogs sniff their genital areas. Yes, it is quite a radical form of saying hello.

Running into another dog is a frequent occurrence for pet parents during routine walks. The scenario that unfolds during these encounters reveals that our dogs use their language which includes barks, friendly sniffing, and body posture.

Dogs talk with their noses

Smell is the most important communication tool among dogs. With over 300 million sensory receptors in the nasal cavity, the nose is the most powerful scent instrument in nature.

Backed up by the brain, which devotes 40 times more processing power to smells than a human brain, it is not surprising that dogs perceive the world via their nose. To be more precise, dogs respond to the chemical scents (pheromones) that are hidden in the urine, saliva, and vaginal secretions.

When dogs sniff the urine of another canine, they look for messages that will tell them the social status as well as the physiological and emotional state of that dog. Yes, you’ve read it right! When dogs smell another dog’s pee, it’s like checking out that doggy’s profile on ItDog (the imaginary social media for dogs). Intel is only a sniff away!

On a serious note, pheromones help dogs identify long-lost friends and catch up on things. Their fantastic scent memory helps them recall which one of them was the alpha in the pack.

When a dog is smelling another dog’s urine, it’s like checking out that doggo’s profile on dog tinder

The dialects of barking

Recent research reveals that there may be more to barking than we originally assumed. Scientists have taken spectrograms of dog barks and found that not all barks are identical. Interestingly enough, the same dog can produce different types of barks. Canines have plastic vocal cords. They might be proficient in changing their voices to make a variety of sounds. But like in any communication, context is the king.

A dog’s barks can vary in pitch and amplitude. The logical conclusion is that they are attempting to transmit different messages. Experts think that barking has developed as a language for dogs during their domestication process. Researchers back up this claim with the fact that barks make only 3% of wolves’ vocalization.

Barking has developed as a language for dogs during their domestication process – need proof? barks make only 3% of wolves’ vocalization

Alert: It is intense, similar to a staccato sound. Used to warn against any threat or danger.

Bored: If not emotionally and physically stimulated, dogs bark in a monotonous sound.

Sniffing plays a major role in the romantic encounters between dogs. The courtship process is kind of a ritual. Females are sexually receptive for 7-10 days, during which they tease the males by frequently urinating and announcing their sexual status.

Males attracted by a female’s sex pheromones travel great distances for the big date. The courtship begins with sniffing the genital area. If receptive, lovemaking commences,  but if not impressed, the female will retreat, maybe lie down, actually telling the male to get lost.

The basic utility of communication in any form is to improve cooperation within a group. Any social creature will try to find its position in a group hierarchy. In their natural setting, dogs live among other dogs, but in the household, a canine perceives the family as their pack.

Body language and vocalization reinforce the dog’s social position within the group.

In the household, the alpha status is forfeited from the start and usually goes to the owner. In their natural setting, on the other side, dogs try to rise to the top of the pack. Usually, the title of the alpha dog goes to the most aggressive canine.

The final battle between the dogs comes down to growling loudly and displaying fangs. If both candidates for the prestige position are ambitious, then biting will be used to win the election. The loser capitulates by tucking their tail and laying down on their back. This is a submissive posture used to avoid future aggression.

Not all encounters are about power play. Some are just for fun. If in a positive mood, dogs talk to each other with friendly gestures like tail wagging. Playful growls are signals of happiness and are accompanied by the play bow maneuver. A bow of the front legs and tail wagging is usually enough to invite other dogs to play. Sneezing is another trick dogs use to signal that they are ready to have fun and romp around. Familiar dogs greet each other with pouncing front paws. Their games involve sometimes gentle biting of the ears and the usual sniffing.

It takes two (or more dogs) to have a ‘conversation’, so do look at the other dog’s body language, too. A relaxed interaction involves a lot of ‘give and take’ body conversation, with friendly, familiar dogs taking turns in offering play signals such as front paws pouncing and side-to-side prancing.

There is no doubt that dogs talk to each other. Any creature that lives in a social group must be able to express its needs and intentions. Just by watching your dog, you can figure out what they’re saying to other dogs and learn more about them every day!