Do Dogs Have Dominant Paws?

Can a dog be right- or left-handed? Yes. Like people and many other animals, dogs often have a dominant side. Read on to learn more about testing your dog’s paw dominance. 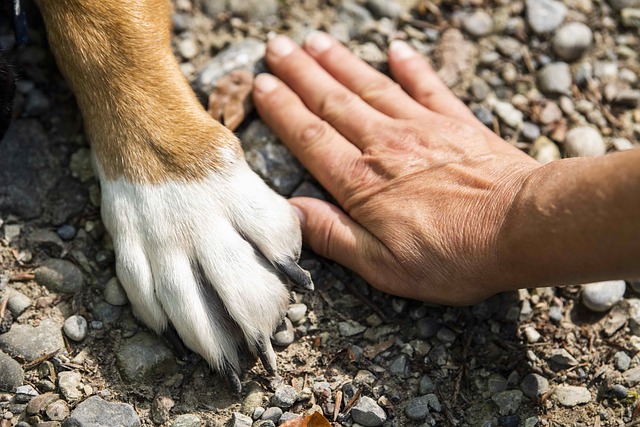 Just about 1% of people are ambidextrous, meaning they have no dominant hand. The vast majority of the population (around 90%) favor their right hand. What about dogs? Can they be lefties or righties? It’s not always immediately clear because dogs can’t write and don’t eat with utensils. While pet owners will need to get a little creative, there are fortunately a number of ways to assess their dog’s paw preference.

Humans are far from the only creatures with dominant hands and feet. Having a dominant side is common in the animal kingdom. Science calls it lateralization. The human brain has two sides, the left and the right hemisphere. Our left hemisphere is typically the more dominant of the two. This helps explain why a majority of humans are right handed. Our closest relatives, apes, are mostly righties as well.

While just 10% of the human population is left-handed, research suggests around 40% of dogs may favor their left paw. Ambidextrous dogs are also much more common than ambidextrous humans.

Do other animals have two-part brains? Yes. Ask anyone who regularly races horses whether their animals take right and left turns at the same speed. They’ll likely tell you that their horse runs a bit faster while turning toward their dominant side.

Chickens exhibit laterality too, mostly where their vision is concerned. One eye is farsighted and helps the chicken see predators approaching from a distance. The other eye is comparatively shortsighted and helps spot nearby food.

Our beloved pups have two-part brains as well, leading most to exhibit a dominant paw.

Can dogs be left-handed or right-handed?

Some dog lovers already know which paw is their dog’s dominant one. The majority, however, enjoy bonding and playing with their canine without ever discovering their preferred paw. Determining your dog’s dominant paw is a fun activity. It can start with something as simple as a high-five. Simple, right? Offer your hand consistently and see if your dog uses the same paw every time.

When it comes to detailed studies, researchers do more than high-five dogs to assess paw dominance. One of the largest studies of left-handedness in dogs involved 17,901 dogs. Pet owners carried out this study in hopes of determining how many dogs are left-handed.

Owners put a treat inside a plastic tube and asked the dog to retrieve it. They did this several times and recorded the number of times the dogs used each paw.

From this data, we can see the similarities and differences between humans and dogs. Left-handedness is more common in dogs than in humans. Among both species, males tend to be left-handed more often than females. Also, dogs are more likely to be ambidextrous than people.

To determine the handedness of your dog, try one of these approaches:

First, get a Kong toy or durable rubber tube that’s large enough to fit your dog’s paw. Insert your pet’s favorite treats inside the toy. Then, call your dog and watch which paw they prefer to use as a spoon. If the dog succeeds in dislodging the treats on their first try, insert another one. You’ll want to run a few trials before you make a conclusion.

Finally, compare the number of times your dog used each paw. If there’s a huge difference between the numbers for their right and left paw, your pet has a paw preference. Otherwise, you’ve got an ambidextrous dog on your hands.

The unique shape of Kong toys was inspired by a rubber axle. Kong inventor Joe Markham was an auto shop owner whose dog enjoyed chewing on the durable rubber car parts.

Wait until your dog is resting. Then, call them over and watch which paw they use to make their first step. Most dogs will use their dominant foot to make the first step. Alternatively, sit at the end of stairs and call your dog from downstairs. Watch which paw they put on the stairs first. Like humans, dogs will use their dominant feet to pull their weight up the stairs.

When playing fetch with your dog, observe which side they turn after catching the ball. They’re most likely to turn towards their stronger side. Do it several times to get a reliable dataset for determining whether they have a preferred side.

Does it matter which paw your dog prefers?

Unlike humans, the gap between left-handed and right-handed dogs is tiny. No dog will feel left out for being left-handed. Research is still ongoing into how handedness might impact a dog’s training and personality. So far, results have been inconclusive. While some studies have found left-pawed puppies easier to train, others concluded that these pups may be more aggressive than their right-pawed peers. Whether or not handedness plays a major role in canine development, it never hurts to learn more about what makes your dog unique. Though they’ll have no idea you’re testing them, your dog will appreciate the extra time spent bonding.

Get a pet insurance quote today

And speaking of things your dog will appreciate, they’d thank you for enrolling in pet insurance if they could. A comprehensive policy will benefit you both by ensuring you’re always prepared to manage pet care expenses. Get a quote from Animalia today.