How Dogs “See” the World Through Their Noses

While we humans depend mainly on our sight and hearing to safely navigate the world around us, dogs rely much more on their powerful sense of smell. In a sense, dogs “see” the world through their nostrils, experiencing stimuli and even communicating. 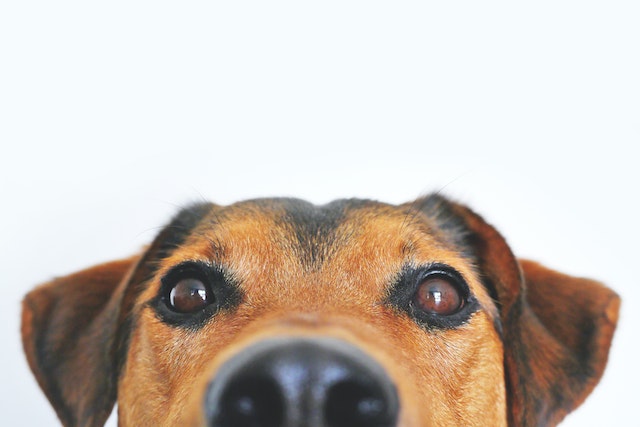 From the short, up-turned noses of breeds like the Pug and the French Bulldog to the long snouts of the Great Dane and Dachshund, the nose is a prominent and distinct canine feature. Your dog’s unique nose may be adorable, it may even be the reason you picked them over all the others, but that snout isn’t just for show. Noses are key to canine survival. While we humans depend mainly on our sight and hearing to safely navigate the world around us, dogs rely much more on their powerful sense of smell. In a sense, dogs “see” the world through their nostrils, experiencing stimuli and even communicating.

Just how powerful is a dog’s nose?

Although it is impossible to say exactly what dogs are thinking and experiencing, it appears they use scent to work out where things are in the world around them. For example, when we enter a room, we scan it with our eyes. Dogs, however, primarily explore with their snouts.

Recent research using MRI scans on the brains of dogs has revealed just how much their sense of smell works like our sense of vision. The human nose contains around 6 million scent receptors. That sounds impressive until you compare it to the canine equivalent. Dogs have more than 100 million sensory receptors in their nostrils. Perhaps more impressively, the part of the brain that analyzes smells is 40 times larger in dogs than in humans. Scientists at the Sensory Research Institute in Florida have estimated by scientists that a dog’s power of smell is up to 100,000 times more acute than a human’s!

What dogs can learn with a single sniff

With a single sniff, dogs can interpret an entire story without words. A dog’s nose uses amines and acids as a basis for chemical communication with other dogs. From these chemical aromas, one dog can quickly determine the gender, mood, and dietary preferences of another dog as well as whether this dog is happy or aggressive, healthy or ill. Dogs can gather additional information once they’re up close and personal, hence all the sniffing when they make introductions.

In a new environment, dogs can find out a whole library worth of information about recent canine inhabitants and passers-by with just a few sniffs. If a dog sniffs your clothing, it can quickly discern whether you have any pets, what kinds, and how many. Dogs can also pick up on our feelings of fear and anxiety through their sense of smell. When we are stressed, we secrete adrenaline, a hormone that dogs can easily sniff out (though it’s undetectable to us). There’s no sense trying to hide how you feel for your dog. If you are stressed or unhappy, chances are they’ll sense it.

Dogs also have a great homing instinct that depends on their ability to smell. Since dogs move their nostrils independently, they can determine the direction of an odor and use their sense of smell like a compass.

A dog’s nose is so sensitive that they can sniff out the equivalent of ½ a tsp of sugar in an Olympic-sized pool filled with water.

Dogs also have a unique tool in their nasal cavity that opens into the roof of their mouth. This vomeronasal feature is known as Jacobsen’s Organ and provides a second olfactory system that increases a dog’s ability to smell through chemical communication. When you see dogs flaring their nostrils and appearing to curl their lips, they’re actually allowing the Jacobsen’s Organ to open up and receive more scent molecules from the air and nearby surfaces. Nerves from the Jacobsen’s Organ link directly to the brain and respond to things that have no odor at all, meaning dogs can detect odors that should be undetectable! At birth, these unidentifiable odors allow a blind pup to tell which dog is its mother while later on, pheromones tell male and female dogs whether another dog is available for mating and breeding.

For every one scent receptor a human has, a dog has around 50 of its own.

Why do dogs have a wet nose?

Conventional wisdom holds that a wet nose is a sign of a healthy dog. There may be some truth to this saying as a wet nose is related to smell and a strong sense of smell is essential to a dog’s happiness and confidence. Your dog’s nose actually works best when it is damp as the wet outer section and the mucus that covers the nasal canal help capture aroma molecules efficiently. Dampness is so vital for smell that dogs will often lick their noses when they become dry.

Your dog’s sense of smell is extremely powerful, but you can train them to achieve even greater sniffing feats. Here are six simple sniffing games to get you started. You’re sure to have everything you need at home.

Find it – Place a favorite toy just out of your dog’s reach, say “Find it”. When your dog successfully noses the toy, reward them with praise and a tasty treat. Now repeat, moving the toy further away each time (you can create an invisible scent track by dragging the item along the floor)

Pick a hand- Place an edible treat in the palm of one hand, make two fists and hold them in front of your dog. Now say “Find it”. When they do, reward them with praise and the treat. If they don’t, show your dog the treat again and repeat your instruction.

Hide the treats- Hide dog treats in another room, some in obvious spots and others in more challenging places such as under a rug. Now let your dog in and say “Find it”. Offer praise every time your dog sniffs out a treat.

Pick a cup- Turn three paper cups upside down and place them on the floor. Hide a treat under one of the cups and say “Find it”. Offer plenty of praise and the treat when your dog knocks over the correct cup. You can make this game more challenging by letting your dog see you place the treat and then shuffling the cups

Unroll the towel- Sprinkle some kibble over a flat towel, roll the towel up to hide the treats. Now say “Find it”. If your dog is unsure, start unrolling the towel a little to encourage them. As your dog unrolls the towel with their nose or paws, they’ll be rewarded with kibble.

Hide and seek- While your dog is distracted, hide (stay in the same room until they’re used to the game). Now say “find me” or have someone familiar with your dog encourage them to find you. Celebrate with treats and praise once you’re found.

Now that your mind has been blown about your dog’s incredible sense of smell, you can use this information to make your dog happier by taking it on the occasional “Sniffy walk”- letting it lead the way and take as much time to smell as it would like. Such walks can make dogs happier by allowing them to gain lots of information about the world around them.