Why Do Dogs Have Tails?

Check out Animalia’s guide to the canine’s tail and learn everything you need to know about its function, health risks, and more. 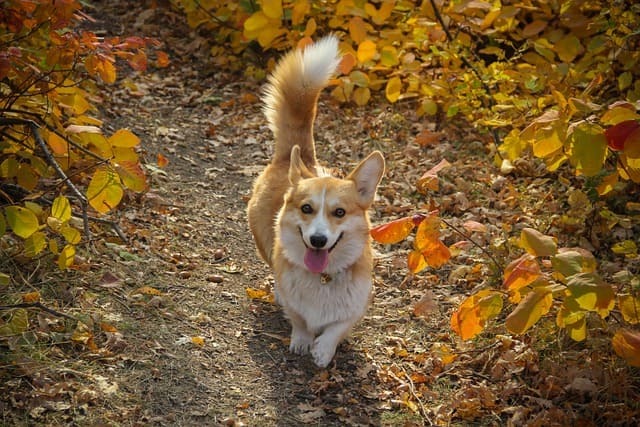 Long or short, curly or straight, tails come in all shapes and sizes. Plenty of breeds are even recognizable by their tails alone. They’re far more than just an aesthetic appendage, though. A tail helps a dog communicate, helps them through day-to-day activity, and, of course, provides for hours of diversion.

Why do dogs have tails?

The tail has a tale as old as time. They’ve been around since before dogs even existed. Gray wolves have tails and the feature wasn’t lost as the various types of dog evolved from their ancient ancestors. But what purpose does your pup’s tail serve? A dog’s tail has three primary functions: movement, balance, and communication.

Affecting speed and balance, the tail helps a dog to run quickly and efficiently. When a dog is turning at high speed, the front legs shift toward the new direction. The hind legs, however, maintain their straight path. The tail leans in the new direction, providing a counterweight that keeps the dog from stumbling. Tails also play a critical role when dogs are swimming, acting as a rudder to help dogs turn from side to side.

We’ve all seen acrobats defy death by walking on tightropes. For balance, they typically rely on their extended arms or a long pole. A dog’s tail serves much the same purpose as these balancing aids. The longer the tail, the more effectively it helps a dog keep their balance. They’re especially useful for keeping dogs from falling when walking on unstable surfaces. When the dog tilts to one side, they’ll swing the tail to the opposite side to shift their weight and regain balance.

Your dog may make expressions that call to mind smiles or frowns, but they’re not really telling you how they feel through expressions. Tail movement offers a much better picture of a dog’s emotions. Depending on the direction and intensity, tail wagging may indicate happiness, curiosity, aggression, or other feelings.

The tail serves as a communication tool. It helps dogs engage in “conversations” with humans but also with other dogs. Friendly interactions with people or canine peers will find dogs wagging their tails emphatically, often to the point that their hips shake. Lowering of the tail typically indicates submission, while a high tail and arched back suggest an aggressive posture.

What is a dog’s tail made of?

Next up in the tale of the tail, let’s take a look at its anatomy. If you’ve accidentally ever stepped on your pooch’s tail, you must have noticed that it’s definitely a sensitive part. That’s because it’s an extension of the spine, consisting of vulnerable nerves, muscles, and bones.

Depending on the size of the tail, it can contain between 6 to 23 bones called vertebrae. These bones are smaller and more flexible than those on the upper side of the spine.

A dog’s spine has 26 vertebrae running from the neck to the hip. The hip bone, also known as the sacrum, connects the tail to the rest of the spine. Humans have an extra bone after the sacrum called the coccyx. You probably know it by its other, more common name: the coccyx.

A network of nerves connect the tail to the brain and blood vessels connect it to the heart, which pumps in blood.

The various types of canine tails

Look at the canine community and you’ll see a variety of tail shapes. Here are all the common varieties of tails:

Dogs wag their tails to converse with people and other dogs, but experts have found that they rarely do so when they’re alone.

What is your dog’s tail trying to tell you?

Learning the tail’s language can help you better communicate with your dog and build a stronger bond. Translating tail movement is a simple process involving close observation and interpretation. If a dog is relaxing, the tail will rest in its natural position. When the wagging begins, your dog is saying something. What could it be? Here are a few things dogs usually say with their tails:

Reading your dog’s mind isn’t as hard as you might think. Just observe their tail and overall body language. Tails may take many forms, but they all speak one language. Learning to speak it can improve bonding, reduce conflict, and build a trusting relationship.

Want to gain even more trust? Buy a pet insurance policy for your dog. It’s a great way to show how much you value everything they’ve brought to your life. It’ll give you peace of mind too, providing a pet expense safety net. Reach out for more information on get a quote from Animalia today.