How to Prepare Your Pup for the Fourth of July

You may love the Fourth of July, but there’s a pretty good chance your pet does not. Read on and find out how to ensure you & your pup both have a happy and safe holiday. 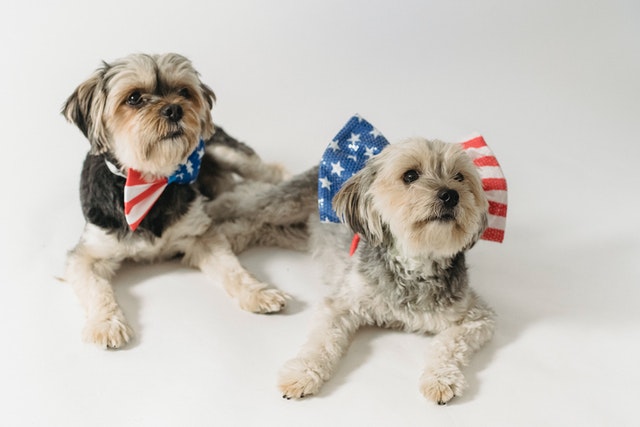 When humans think of the Fourth of July, they envision beach days, barbecues, and cozying up with loved ones watching those megawatt, sparkling fireworks light up the night sky. When your dog thinks of the Fourth of July…. Well, they think of possibly the worst day of the year. July 4th can be a frightening and dangerous day for your pet spent alone or with a large crowd filled with loud frightening sounds. Did you know that July is also National Lost Pet Prevention Month? More pets end up at shelters this month due to fear and anxiety brought on by fireworks. Read on and find out how to ensure you & your pup both have a happy and safe holiday.

Let’s start with the sad numbers…

July is National Lost Pet Prevention Month. According to Animal Control Officials across the country, there is a 30% increase in lost pets between July 4th and July 6th. July 5th is the busiest day of the year for shelters. Sadly, only 14% of pets are returned to their owners and what’s worse is that 30%-60% are euthanized because they cannot be properly identified and returned to their owners.

Why are dogs afraid of fireworks?

The unpredictability of fireworks and loud sounds they emit may cause dogs to perceive them as a threat, which can trigger a fight or flight reaction. Your dog may bark or try to run away and hide from the sounds. They may also show other signs of anxiety, such as panting, pacing, restlessness or whining. Even the most well-adjusted dog can be affected by these frightening sounds, as it does not discriminate by breed, age or gender.

It is also thought that the booming sounds from fireworks may also trigger a memory from a traumatic noise-related event early in the dog’s life or a lack of loud noises early on in the puppy’s life.

Another possible explanation behind the phenomena is the way owner’s react to their dog’s behavior. In other words, if you’re calm, cool and collected, you have a better chance of setting your pup up for Independence Day success.

Creating a safe space for your pet can help distract them from outside noises. Drape your pup’s crate with blankets, and place their favorite toys and treats inside. Playing music and running your air conditioner will drown out the anxiety inducing booms.

Things you can do before the big day

Desensitize your pet to the fireworks sound

Attempting to desensitize your pet to fireworks may work in your favor. Try working with your dog in advance by playing recordings of fireworks at a low level while playing with your dog and giving him or her treats. Over time, gradually increase the volume of the fireworks during these play sessions.

You may also distract your pet by requesting them to focus on a task, such as playing “find it” (think of it like an Easter Egg hunt for your pup: hide treats in a few locations around your home and have them sniff them out) or giving them a game to play, such as a snuffle mat or an interactive dog toy that uses not only their nose but their brain to seek treats out of a dispenser.

If you have a crate handy, we suggest creating a safe space for your pet. Place the crate in a quiet room, drape blankets and towels over it, which will help to create a peaceful sanctuary for your pup. Place his favorite blanket, as well as toys and treats inside the crate to help your pooch get into a zen-like state of mind. Turning on air conditioning as well as music or the television will help drown out outside sounds. Just like humans, pups love a relaxing atmosphere to soothe their nerves.

Investing in calming wraps, vests and shirts also can help. Many dogs find the light, constant pressure soothing. If you’re unable to purchase a wrap or shirt, you may also wrap your dog in an Ace bandage, as it emulates the same “hugging” effect. A good old-fashioned snuggle may help as well! Calmly reassuring your dog is fine as long as you avoid frantic movements or loud exclamations, both of which can exacerbate their anxiety.

These tips and tricks aren’t just limited to fireworks-they can also be helpful during thunderstorms.

Here’s how you can keep your pet safe this Fourth of July:

While we love the Independence Day celebrations, we love our pets more. We hope you take the necessary precautions to protect your pet so you both can have a safe and happy holiday!