Why Does My Dog Run in Circles?

The sight of your dog uncontrollably running in circles might make you think they’re going crazy. Vets refer to these explosive outbursts of energy as FRAPs (Frenetic Random Activity Periods), while dog owners refer to them as zoomies. 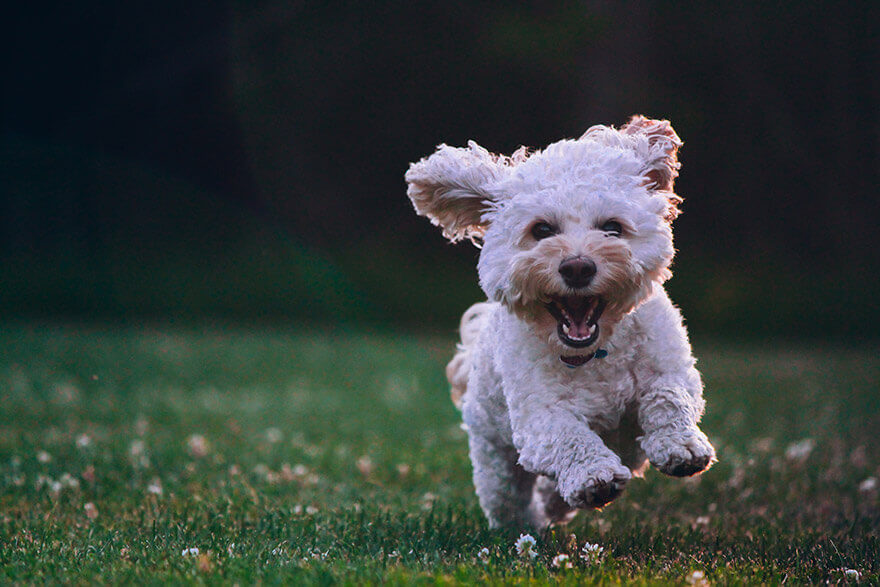 The sight of your dog uncontrollably running in circles might make you think they’re nutty. Commonly known to owners as the “zoomies,” vets refer to these explosive outbursts of energy as FRAPs (Frenetic Random Activity Periods).

Yes, zoomies are more normal than you think.

Energetic running in circles is natural, and you rarely have to worry about them- as long as your dog does it in a safe environment. Nevertheless, you should observe the frequency and circumstances of your dog’s zoomies as sometimes it may indicate a medical or behavioral issue.

Running in circles accompanied by other symptoms (such as pulling to one side while on a leash) might be a sign of dementia in dogs.

As with any other sudden change in your dog’s behavior, you shouldn’t immediately jump to conclusions that there is a serious medical issue. In some extreme cases however, running in circles accompanied by other symptoms (such as pulling to one side while on a leash) might be a sign of dementia (Pssst… Have you checked out Animalia Pet Insurance yet?).

If you notice excessive zooming accompanied by odd eye movements or bumping into things, it’s time for a veterinarian to check your pup for possible neurological issues. It would be helpful to record your dog while they’re displaying these unusual signs and show the video to the vet.

Another area of concern is the possibility of your dog hurting themselves or other humans around them while running in circles. Zoomies are usually safe for young and healthy pups, but if an older dog, or one who suffers from back problems, circles too rapidly, they may injure themselves. Zoomies can be especially risky if near stairs or if the floor below is slippery.

In addition, your dog may want to bite or nip while they’re energetic and running in circles. To prevent them from getting even more aggressive, don’t follow or chase after them during these episodes. Make sure that there aren’t any children near your dog’s zoomies as they can get knocked over and hurt.

Zoomies as an emotional response

Healthy dogs can often experience outbursts of energy for emotional and situational reasons, such as excitement or anxiety. Your dog may start running around in circles upon seeing you coming home or before an upcoming activity they find exciting- if they see you grabbing a toy for a game of fetch or getting the leash for a walk.

While some dogs may start running in circles at a particular time of the day, such as after a bath, others may do it as a coping mechanism before triggering events like a vet checkup. Dogs also tend to partake in zoomies after an uncomfortable event that has made them nervous, such as having to stay well-mannered in front of unfamiliar guests in your home.

Physical inactivity can make us restless and it has a similar effect on our dogs. A dog that has stayed sedentary for a long period of time has to release that excess energy at some point- which could result in zoomies. Most dog breeds are supposed to experience plenty of daily exercise. Otherwise, they may start displaying unusual and frantic behavior, such as running in circles. Controlling and maintaining your pup’s exercise routine is an important part of dog ownership.

Your dog’s hyperactivity and running in circles could also be due to a recent change in their daily diet. Your dog can get the zoomies from food high in sugar, much like a toddler would.

A healthy diet and regular physical activity are vital for optimizing your pup’s energy levels and avoiding excessive outbursts.

What should I do about my dog’s zoomies?

You should not be overly worried if your dog has occasional zoomies. This is normal behavior for dogs, but if you would like to decrease the amount of zoomies that your dog gets, you should provide them with adequate exercise, mental stimulation, proper nutrition, and calming tools.

Here are a few suggestions: