Keep on reading as we reveal one of the biggest mysteries: Do dogs dream? And if so, what do they dream about? 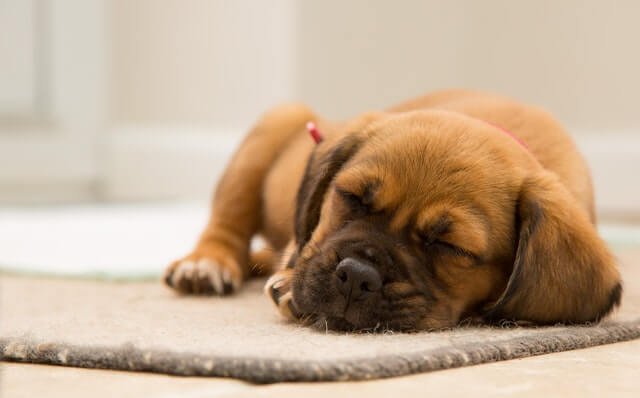 As a dog owner, you have probably witnessed, more than once, a situation when your dog starts making weird sounds while they’re sleeping and even starts running in place! Wow, what’s going on here? Why are they acting like humans when they sleep and dream? Is it possible that they are dreaming, too?

If you’re wondering too, stay with us as we reveal one of the biggest mysteries: Do dogs dream? And if so, what do they dream about?

Understanding dreaming in dogs require us to learn more about their sleep cycle.

You probably know that people go through different phases in their sleeping cycle and that the dreaming phase starts at a very specific point in this cycle. Scientists believe the same goes with dogs.

REM sleep typically begins 20 minutes into a nap and lasts for two-to-three minutes. This is when you might notice your dog twitching and making sounds while their eyelids are flickering. That is the stage your dog is dreaming.

Scientists reporting in the journal Physiological Behavior in 1977 recorded the electrical activity of the brains of six-pointer dogs for 24 hours, and found that the dogs spent 44% of their time alert, 21% drowsy and 12% in REM sleep. They also spent 23% of their time in the deepest stage of non-REM sleep, called slow-wave sleep.

Dogs dream during their REM sleep which begins 20 minutes into a nap and lasts for 2-3 minutes.

Signs your dog is dreaming

If you notice your dog is in their REM phase, chances are they’re dreaming. This phase usually occurs during a short afternoon nap rather than a long night’s sleep.

Other than the rapid movement of the eyes and irregular breathing, there are other signs indicating your dog is dreaming. Just like people, canines react subconsciously to the images they dream of while they are sleeping. So, you can hear a roar, purr, whine or sob. Dogs can also move their legs as if they are running. They can even bark and wake themselves up.

The role of technology

We know humans are dreaming based on their shared experience, as well as on technology which allows us to monitor electrical impulses activity in our brain while we sleep. Dogs, on the other hand, cannot share their experience but luckily, the same technology can be applied on dogs brain too. And the results? Quite the same as humans.

Turns out, all those attention-grabbing nighttime shuffles are actually part of your dog’s dreams.

What do dogs dream about?

Well, this is definitely the most interesting question of all!

If dogs do dream like humans, are their dreams similar too? While no one knows for sure what dogs dreams about, researchers think they likely dream about dog things like chasing cats or squirrels and playing fetch with you.

Just like humans, they can also have bad dreams or nightmares during which they may replay traumatic events or dream about fears like being alone, getting in a fight with another dog, or being in a thunderstorm.

A few years ago, Dr. Deirdre Barrett, Clinical and Evolutionary Psychologist and teacher at Harvard Medical School spoke to People magazine and said that dogs are likely dreaming about their owners too. Yep, your face, smell, mutual experiences, are all part of your dog’s dreams.

The role of a dog’s size

Some dogs dream more than others. Apparently, a dog’s size plays a role when it comes to dreams: Small dogs and puppies dream fast and often, with 60-second dreams every ten minutes or so, while larger dogs have longer dreams—up to about five minutes—with an hour of non-dream time between dreaming sessions.

Is it a seizure or a dream?

Sometimes, the warning signs of canine seizures may be very similar to the signs your dog is dreaming. How can you distinguish between them?

Dog seizures are irregular motoric movements created in the brain, while dreams are regular electrical impulses. The tics during a dream usually last for a short time whereas the spasms of a seizure typically last longer and are much more violent. Seizures occur in limbs that can become rigid and stiff.

While no one knows for sure what dogs dream about, researchers think they likely dream about dog things like chasing cats or squirrels and playing fetch with you

Check about dog insurance today and save yourself the trouble when anything unexpected happens.

No matter what our dogs dream about, there is some comfort in believing that they, like us, have dreams and fears that play out in their sleep, making us more alike than different.